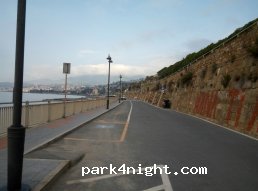 on 17 06 2022
Great spot with awesome water view, a little bit noisy with the club nearby and scooters coming and going

on 21 05 2022
Great spot. Close to the beach with a couple of beach bars (including WC and showers free to use). Well lit and other campers so feels safe. The cycling cafe at the end of the street is very good. Town centre is an easy 30 minute walk along the cycle path. We stayed 2 night with no problems.

on 18 04 2022
Stayed in our 5.5m camper in mid-April near the end of the dead-end road, without a ticket and had no trouble, though a ticket may be required at certain times of year. Fantastic spot right on the sea front, sound of the waves was a highlight. A few walkers passing in the morning did not seem to mind us and did not disturb us. Thoroughly enjoyed our night here.

on 24 03 2022
Great spot! Arrived around 7pm on a weekday, very quiet with very little traffic. Amazing views and great for sunset! Considering we had a 7m van we were able to drive down to the bottom turn to come out no problem. Parking was great and easy too. Highly recommend!

on 17 01 2022
We spent here 3 nights without any problem. The city is close, the view is amazing, the place is not noisy. I can recommend it.

on 9 01 2022
We stayed here for a few days in January, we had it to ourselves at first but still a lot of campers around this time of year :) there are numerous water taps nearby and also outdoor showers and toilets along the walk so had all of that handy. 15min walk into centre and the view is wonderful, hell of a sunset ! Keep it clean everyone

on 10 10 2021
Great place, at least off season! People, please park towards the back, so locals have the spaces at the beach accesses and bars, so to keep them happy

on 19 09 2021
Wonderful place for a night. Right next to the beach. Due to that it’s not quiet at all. The waves are really loud, so take Oropax with you. Besides that there are a lot of nice people and you can use the restrooms at the beach.

on 15 09 2021
Right by the seaside, super nice view and sound of the waves. We went for drinks to Il Cubo, great place! Super friendly staff that told us where to get water and where we could use the bathrooms at night.

on 30 08 2021
Noisy because of the agitated sea but quite comfortable for one night.

on 23 06 2021
If you are looking for a splendid view, a quiet place at night, a clean street, a beach directly in front of you and some beach bars close if you fancy some beers, this is the spot! It is amazingly beautiful.

on 22 07 2020
Nice view and sound of the ocean. The beach is always a bit crowded (we were there in the evening and the morning) so not very private place. Parking coasts 50ct per hour from 8am to 8pm.

on 11 07 2019
Amazing place; well lit at night. We stayed near a cafe called El Lido which has toilets you can use during the day. The cafe also does great coffee and paninis. The sea was stunning to wake up to each morning. There's cold showers along the sea front.

on 5 07 2019
Just on sound of road, near clubs, noisy and people walking all hours, one way system and not suitable for larger camps, both mirror and bumper was damaged

on 8 08 2018
Great spot just by the beach. showers at the beach. Lots of lights on the street and a nice bar down the road. had an amazing night here

on 10 06 2018
Great spot! Little beach to sit on or various concrete slabs along the coast to lie in sun. Showers available. Really great cycle path that takes you into San Remo - separated from the road and very flat and smooth! Roughly an easy 15 min ride into town. Lovely local surfer cafe called Il Cubo just below parking - very affordable prices, e.g. 1 euro for a coffee, 2.5 a beer, 3 for prosecco. WiFi available there too - slow but stable. Great service and friendly staff.

on 28 05 2018
Parked here for one night was excellent, very safe and quiet. Lovely to hear the sea at night. Right next to a great bike/walk track that takes you straight to town - 10 minutes bike. The road is narrow in places but enough space we have a big camper 6.5 m long easy to turn around at the end. Recommend

on 6 05 2018
Very nice! Parking lots only for small cars but there where five other vans the same night. If you wake up early there’s free showers at the beach bars!

on 8 03 2018
Just arrived. No one else here so choice of spot. Would be difficult if you are longer than 6m to turn around as it is a dead end.

(18038) Sanremo, 17 Vicolo dei Moraglia
Public toilet at a small playground. Was open during the day.
1

(18038) Sanremo ,94 Via Bussana Vecchia
Parking to visit bussana vecchia. Attention narrow road to get there and it is...
1