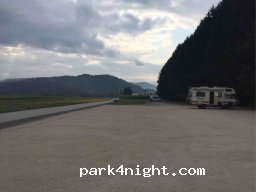 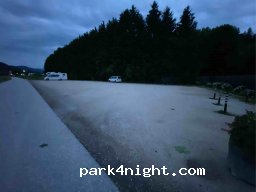 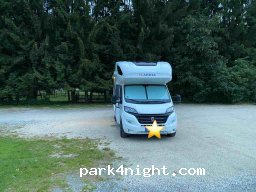 le 4 10 2020
We arrived in the afternoon when the parking lot was still pretty full. In the evening, however, the cars left and there were four campers that stayed the night. The ground is gravel and even.

le 6 09 2019
Spent 1 night on a way to Croatia. A quiet place, children can watch animals behind the hedge. Some animals make a little noise during the night (especially donkeys :) but it wasn't so disturbing for us.

le 26 08 2018
Stayed here for one night since we were traveling from Croatia to Austria. We arrived at around 9PM when it was already dark and there were two big mobile homes already at this parking ground, which also stayed over night. At least it looked like there were people in them. Occasionally there are cars passing by on the street in front of the lot, but we didn’t have any problems and it was rather quiet at night. We left at around 8AM in the morning. I’ve noticed that there was another third (also quite big) mobile home at the parking space, which must’ve arrived late in the night. But even though with three huge vehicles we still had our van parked many meters from the others. I can also recommend the restaurant Franco Bollo, which is about a 7 Minute ride. Not super cheap, but the right food after you’ve probably stayed in traffic at the Slovenian - Austrian boarder, like we had. We can recommend this place for one quick night.

le 16 08 2018
Quiet place. take a walk along fence: somewhere could be smelly due to goats nearby