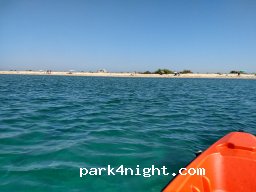 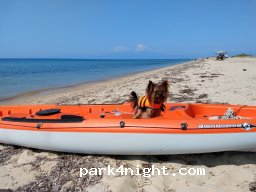 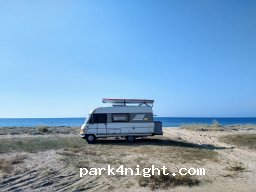 on 24 07 2022
We stayed with our camper for 3 nights here. There are plenty of spots along the beach up to the corner but it is a sandy road and it is bumpy. The beach was great, sand, no rocks and shallow waters. In the afternoon the wind was blowing so it was not to warm. Stayed here with our kids and they really enjoyed it.

on 19 10 2021
WARNING we stopped for 20 minutes by the beach bars and went for a short walk and returned to a smashed habitation window and some possessions stolen. On talking to some locals they said this area is well known for break-ins

on 19 08 2021
Very nice view but IT can be noisy at night because many young people are partying on beach at night. With caravan you can drive only to first kanteen. Next only 4x4.

on 24 03 2021
Nice long beach with endless possibilities to camp. Some spots are better for 4wd vehicles, some spots are good for regular vans/motorhomes.

(575 00) Epanomi,
Public shower and faucet with the possibility of connecting a hose. In high season...
4

() ,
Water tap next to the chapel. It is possible to connect water hose.